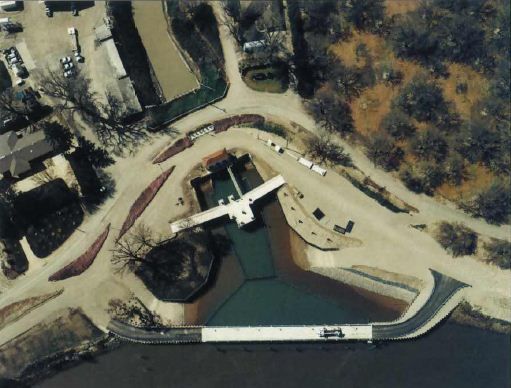 The objectives of the project were to make the Wilkins Slough Diversion “fish friendly,” minimize the impact of water diversions on winter-run chinook salmon and meet current resource agency criteria for fish protection facilities.  A critical goal that was successfully met was to construct the fish screen structure without interrupting irrigation water deliveries or interfering with fish migrations in the Sacramento River.

Wilkins Slough Positive Barrier Fish Screen is one of the largest fish screening facilities in the Sacramento River Basin.  The facility has a design flow capacity of 700 cubic feet per second but can accommodate flows up to 830 cubic feet per second.  The structure is positioned along the right bank of the Sacramento River in front of the Wilkins Slough forebay.  The screens are continuously cleaned by a single-arm mechanical brush mechanism that sweeps across the entire screen surface every 5 minutes. Reclamation District No. 108 consolidated three of its river diversion pumping plants into a single facility with a state-of-the-art fish screen.  The initial project investigation confirmed that it would be less costly to build a new combined pumping plant with a fish screen than to install separate fish screens on each of the three existing pumping plants.  Further, it was determined that combining the three pumping plants would result in a lower water diversion requirement, thereby lessening the effects on protected fish species.

Below is a link to the Draft South Steiner Pipeline Environmental Assessment.–a new project to reduce the taking of fish along the Sacramento River.